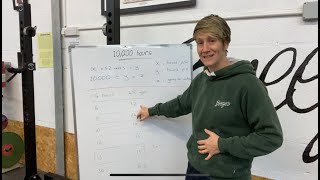 I want to talk to you about the 10,000 hour rule. This was made famous by Malcom Gladwell and his book Outliers. It talks about taking approximately 10,000 hours for anybody to master a complex new skill.

Now if you look at weightlifting as a fairly complex skill and reapply that principle, maybe this will get you thinking about how long it’s going to take you to achieve your weightlifting potential.

Now your 10,000 hours / Y = Z. That is how many hours there are in a year that you practice, and that will give you Z, which will be the number of years that you will achieve mastering your new skill.

If you are training 4 hours a week for example, that is going to put you into the equation:

Go ahead and figure out approximately how many hours it will take you as an individual to master a new skill of weightlifting.

Now, I’m going to give you a few stats here:

6 hours/week is going to take you 32 years

8 hours/week is going to take you 26 years

15 hours, which is where I was during the bulk of my career, was 15 years.

Putting the theory into practice

I’ve put a number down here: 30 hours/week. That is the amount of time some of the Chinese lifters are doing. They are spending some 6 hours a day in the gym. Based on 30 hours a week, they are only going to take 6.5 hours to achieve their potential.

Now, I think that says an awful lot. If you take a young lifter and work on all areas regarding weightlifting, not just the snatch, clean, and jerk, but areas like prerequisite exercises, plus all of the conditioning movements as well… Then I’m thinking, that for somebody who starts at the age of 12 or 13, they are going to be a master in the sport before they even hit senior ranks. Compare that to Joe Bloggs who trains a few hours a week and balances training with work or studies. The chances are, they are never going to achieve their potential.

If we look at the numbers that I did, it took me 13 years to get to my potential. I started this sport when I was 13 years of age, and I think I hit my peak when I was 26. So for me, those numbers are spot on.

Criticisms to the theory

Now, that’s all very well but, there is some scrutiny over the 10,000 hour rule and I don’t want some of you to feel disheartened. I’m sure some of you are reading this thinking, “Oh my god, there is no point in me even trying because I’m never going to achieve it.”

The rate of improvement is going to be rapid when you start out in a sport. Expect to make significant gains in the first few months and the first few years of training. That is inevitable. Getting in the last few percentages is where it takes time.

There are also a few criticisms that I just want to share with you to consider and hopefully get you leaving this blog feeling a little more positive. The study that was done for this 10,000 hour rule was not scientific, it was an oversimplified study and a big generalisation. It didn’t at any point take into consideration genetics, for example.

We all know that one person can naturally be better at something than another person, and a good way to explain this is by using an example of twins. If you compare identical twins, one will often be better at doing something than the other – and that is totally normal. What it also doesn’t factor in is age. If someone starts a sport or a skill at a younger age, there is a period of time where they will pick up those skills far quicker. If you compare someone who is very young as a child to someone who starts the sport in their mid-20s, mid-30s, the younger person is likely to pick up those skills far quicker than someone a little bit older.

So as well as genetics and age, the 10,000 hour rule also fails to factor in quality vs quantity. Anybody can go into a gym, but what you do in the gym is absolutely critical. More isn’t always better. We know that. You can go in there and slog your guts, but if you do it badly, you’re never going to progress and develop.

Now, if you think you are getting amazing coaching, then that is wonderful. You are likely to hit your potential far quicker than somebody who is self-taught.

What research has shown is that emotions play a huge part in somebody achieving their potential as well. If you as an individual are driven, and you have a goal that really excites you, then you are far more motivated to want to practice, to develop, and achieve your potential.

That is linked quite closely to motivation. If you are highly motivated by whatever goals you have set for yourself, you are far more likely to work your backside off, and to really progress session by session, week by week, month by month, and year by year.

Now, one thing that is neglected is mental practice. This is huge and powerful. There will be times where you are physically unable to train. But the time that you spend thinking about what you want to do, and mentally practice, is hugely powerful. It has been known that injured athletes across different sports, have been able to apply the psychological skills that they’ve learned from the sport to enable them to perform really well when they recover from injury.

So, don’t neglect how important the psychological aspect and the power of the mind can be.

Put in the work, see the results

Regardless of whether you think this 10,000 hour thing works, hopefully you are thinking “No, I can do that quicker,” and many people will. This is an average number. Some people took longer, some people took a lot less time.

Hopefully you’re going to be one of the people who takes a lot less time because you’re reading this, you’re motivated, you want to improve, and you’re making good gains.

One thing that is agreed on, regardless of what you read and who you speak to, is that to excel in anything; to develop and master a skill; to be absolutely competent in what you’re doing; and to achieve your potential, will take a tremendous amount of time and practice.

There is no other way of reaching that end goal apart from putting the hours in; the focused time and dedication.

This is Malcolm Gladwell’s theory, the 10,000 hour rule. I hope we’ve debunked a few of those myths, and I hope you’ve enjoyed this. Give some consideration as to how much time you’re putting in. But at the end of the day, the more time you put in practicing, the quicker you will achieve your potential.