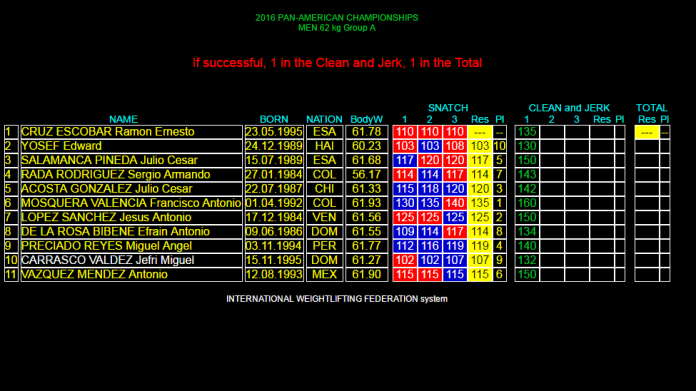 Home » Blog » How to Prepare for Weightlifting Competitions: Part 1

How to Prepare for Weightlifting Competitions: Part 1

Are you new to competing?

I vividly remember going into my first competition. I didn’t even know what a snatch was! I learned how to snatch in a warm up. I had little idea of what to expect. I relied on other people to provide the right information at the right time to make sure that I was in the right place, doing the right thing.

The purpose of this blog is to give you that information before you go into competition.  It is my intention to make you feel a little more relaxed so you are able to enjoy the experience rather than panicking and worrying.

I have divided this blog in to two part so make sure to read Part 2 for some tips on what to expect in the warm-up room and going on to the competition platform.

Choosing the bodyweight category for you:

What are the weight categories?

The first thing I want to talk about in terms of preparing for competition is how to get your body weight right. If this is your first competition, I really wouldn’t worry that much. I would turn up, weigh in, and whatever body weight you are in, go into that category.

If you are a bit more experienced, and you are trying to make weight in a specific category, you would usually train slightly over your weight category. For example, when I competed at 63kg, I would train at 65-66kg. I would need to drop the additional kilos by the time weigh in cam around.

The heavier the lifter, the more muscle mass they should be carrying and therefore, the stronger they should be.  In the 64kg category you are allowed to weigh 64.0 or under but not anything heavier.  64.1kg would be deemed overweight.

How do you lose weight if you need to?

I would recommend checking your body weight in plenty of time prior to competition. Do not leave it until the day before. Check it 3-4 weeks out. I would normally say a kilo a week is a decent amount of body weight to lose if you have to.  Monitoring early should leave plenty of time to lose weight safely while maintaining strength.

I would take the following streps to cut weight:

It is normal to lose 0.5 – 1kg overnight, sometimes more.  To find out how much you are able to lose overnight, I would recommend monitoring body weight in the weeks leading up to competition.  Weigh yourself just before bed, then again first thing in the morning after you’ve been to the loo.  If for example, you consistently lose 0.7kg overnight then you can afford to be that much over the night before competition.

Make sure your scales at home are calibrated.  You can check their accuracy by placing 2 or 3, 20kg disks on the scales.

When it comes to competition, it is important to be organized. Being organised means getting your kit bag sorted, make sure you pack your boots, belt, wrist supports, knee sleeves, tape, scissors, pain killers, snacks for after the weigh in, plus anything you might rely on as part of your normal routine.

Take some ID.  You may be asked to show your ID during the weigh-in. A passport, driver’s license, a birth certificate, etc. The reason they check ID is to make sure that you are who you say you are, especially during your first competition. They also do that to confirm your age if it is an age group competition. I used to keep a photocopy of my birth certificate in my kit bag. Be organized. Have all of those things packed and ready to go to reduce unnecessary stress.

What to expect when you arrive at the competition:

Find out when you are scheduled to compete. Find out when the weigh-in will take place.  This information should be available about a week before the competition, so you know the anticipated timings of your competition. Being in control of these small pieces of information can help you feel more in control.

Let’s say your competition starts at midday and your weigh-in will be between 10-11am, arrive early.

If something goes wrong, you have a flat tire or there is unexpected traffic or an accident, it doesn’t matter if you have enough time left, you have a greater chance of still making it. We would often travel to the competition the night before, depending on where the competition was being held. You do have the cost of the accommodation, but you are there in plenty of time, you know where you have to be, and again, you don’t have the unnecessary pre-competition anxiety.

If it is a long journey, I would recommend going the night before because there is nothing worse than spending many hours sitting in a car, or whatever means of transportation you’re taking, and then having to get out and perform optimally. It’s just not ideal. Regardless if it is the night before or on the day, stop regularly. Take a short walk, move and stretch your legs, particularly your hip flexors. If you sit in a car all day, that is likely to cause you to stiffen up. So, take regular stops, even if you don’t feel like you need to, just to stretch out and get the blood flowing. That will help in terms of you being able to perform optimally.

What happens at the weigh-in?

Now let me explain how the weigh-in works. There might be, let’s say, 10 lifters on the start list. That list is often pinned up outside of the weigh-in and you can see the names in order. The list has relevance as the person at the top is going to be called first at the weigh-in. That person goes in, they weigh-in, then the second person goes and so on. If you are one of the first few on that list, you need to be there in plenty of time to make sure that you are there when they call your name. Miss your slot and you go to the bottom of the list and may have to wait around unnecessarily.  If you are further down the list, still be there on time, because sometimes those ahead of you might be a few minutes late in which case, you may be called earlier.

At the weigh-in, you will be asked to strip to underwear only and hop on the scales where your bodyweight will then be recorded by the officials.  Take a moment to check they have correctly recorded your weight.

You will then be asked for your starting weights.  This needs to be discussed with your coach prior to competition.  Starting weights are normally a few kilos below your best and is a weight you should feel confident hitting.  Don’t worry if you post the wrong weights, you will have two opportunities to change them once the competition begins.

What happens if you are ‘overweight’ at the weigh-in?

If you are more than half a kilo overweight, I would probably suggest that you haven’t managed your body weight well enough. If that happens, suck it up, it is what it is. You probably have to compete in a heavier category. Hopefully you will still be able to compete. If they say you cannot compete because you haven’t made weight, then ask if you could at least compete as a guest. Most decent officials will accommodate such a request.

If you are a younger athlete (by that I mean under 16), and you are overweight, then argue that you are still growing. They should not turn you away. A youth lifter should be able to go up a category. If this young lifter is somewhat experienced and have demonstrated poor weight management, I would have them sweat it out! Hard lessons to learn sometimes!

Now, let’s go back to being just a little overweight. If you’re more than a kilo, I would probably look at moving up a category. If you are within half a kilo, you probably have a chance at making weight. If you have been eating well and are already hydrated, then I would suggest wrapping up in a bin liner. Literally, get a bin liner. Cut a hole for the head and your arms, and put the liner on your skin. Now, put your clothes on top. Get your wooly hat, get your jacket, and go for a run or bike ride, even if it is during summer. Do something that is going to get your heart rate elevated and make you sweat. Go and do that for 20-30 minutes, but don’t kill yourself, because you still need some energy to compete. It isn’t going to be pleasant!

When you come back, sit tight for 10 minutes or so (if time permits) as you are likely to keep sweating.  Then, strip down, wipe off all of the sweat with a towel or t-shirt, go to the loo again, and re-weigh yourself. Hopefully, you would have lost enough fluid to make weight.

If you are still overweight, then you need to make an educated decision on whether it is do-able. Do you need to go and sweat again to lose a bit more or do you need to accept that you are not going to make it? It’s not uncommon to see lifters chewing gum and spitting into a cup although that really is desperate! Some people will lose weight easier than others.

Remember, it’s far easier and less stressful to just manage your body weight sensibly building up to a competition rather than leaving it until the last minute.

So, that is my advice when you go into a weigh-in in terms of preparing for a competition and getting through the first part.

What happens after you’ve weighed in?

Once you weigh-in, then you eat. If it’s your first competition, you may not worry about that. If you are more experienced, and especially if you are making a weight category, then I would advise that you do not eat until after you weigh-in. If the weigh-in is later in the day, then you are going to want to make sure you are managing your body weight well, so you are well inside the category in the morning, and that way you can have a little bite to eat earlier in the day.

After you’ve eaten, it won’t be long before you need to go into the warm up room. Ideally you will have a coach with you at this point.

Be sure to read Part 2 for some tips on what to expect in the warm-up room and going on to the competition platform.